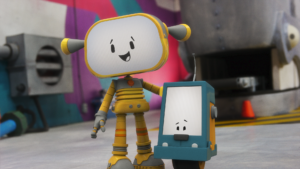 Cheshire Smile Animation Inc. is happy to announce Canadian broadcast license agreements with CBC Kids and City Saskatchewan for the original animated Preschool series Robotik. Multiple episodes will air daily on both networks, CBC Kids starting March 14th at 10:13 AM and on City TV Saskatchewan starting March 15th at 07:37, 09:50, and 12:15. The French version of the series was produced in 2020 for Radio-Canada and TFO with funding provided by Creative Saskatchewan, The Bell Fund, The Canadian Media Fund, and CAVCO. The English version of Robotik features an all-new English dialogue track that has been designed to showcase the star of the show, a heroic robot girl named Beka and her playful dogbot Bubo, while enhancing appeal to the audience of 3, 4, and 5 year-old children. 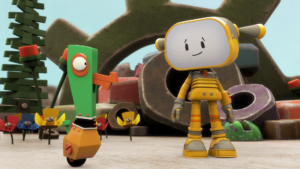 Robotik was originally commissioned for the French-Canadian language territory leading to an opportunity with the Canadian Media Fund for the creation of a version of the series for English viewers. City TV Saskatchewan was key to this process by providing a broadcast commitment for Robotik that allowed the Cheshire Smile Animation Inc. to access funding and embark upon the adaption process.

A writing team with members in Toronto, New York, Dublin, Saskatoon, and Montreal, dug into the original scripts and wrote all new English dialogue for each episode of Robotik. In the original series Beka spoke robot-talk, a non-verbal language. Montreal versioning company difuze provided voice, talent, direction, and synchronization services. The newly recorded voice of Beka matches the picture so perfectly that it is hard to believe the show originated in a different language. By giving Beka a voice that little children can understand and empathize with, the adaption amplifies the pace, comprehension, humour, and emotional engagement of each episode.

The producers of the series are impressed by the results of this process and through our sales partners Branscome International LLC (NYC) have begun to showcase the new version of Robotik to buyers in Canada, the United States and around the world. The programming team at CBC Kids was impressed by the English episodes created, resulting in a show pick-up and launch across Canada that coincides with the Saskatchewan launch on City TV.

ABOUT CHESHIRE SMILE: Cheshire Smile Animation Inc. is a Saskatoon based company with a mission to engage and inspire children through the creation, production, and distribution of original branded entertainment properties. The purpose of Cheshire Smile is to tell stories the make smiles appear in the world. Recent television productions include: Robotik (2020) airing currently on Radio Canada and Television French Ontario, Quizzine (2015-16) which currently airs in Canada on City SK and in Korea on CJ, Space Stretch (2013-14), and the Side Show Christmas (2008) which aired nationally on TELETOON Canada and in France, Brazil, and South Africa. http://www.cheshiresmile.com/

Development and Other News